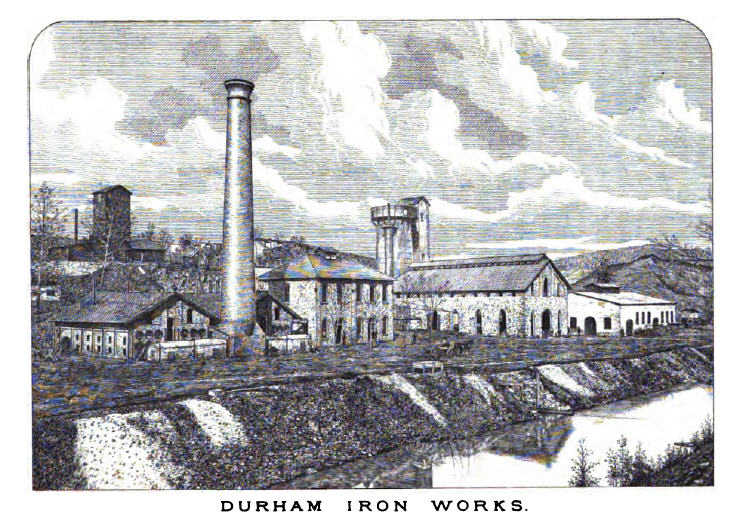 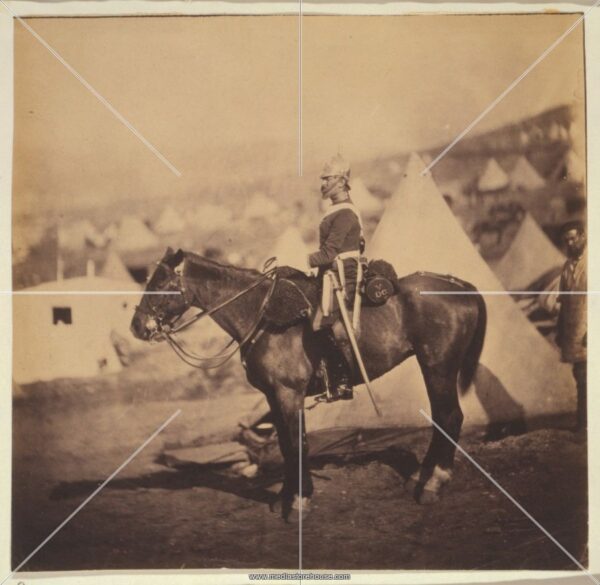 The mounted horseman pictured is Adolphus Burton, a British Army officer, one of the real-life persons who inspired Tennyson’s poem “Charge of the Light Brigade.”  He was owner of roughly 650 acres in Durham that his family had owned from about the 1789 or 1791 date of the last charcoal iron furnace blast in Durham village.

The old charcoal-fueled Durham furnace used tremendous quantities of trees to make the charcoal. The entire area for miles around Durham had been denuded of trees for this fuel. A later superintendant of the iron works, B. F. Fackenthal, stated he thought that the old furnace had shut down because there was simply no fuel left by 1789. The Burtons, who were descendants of James Galloway, never lived in Durham or even in the U.S. They lived in England and rented out their land holdings in Durham to tenant farmers and to some small scale mining operations on Mine Hill.

Apparently by 1847 Burton had lost interest in his far-away land holdings and had his Philadelphia lawyer put it all up for sale. The family and friends of Joseph Whitaker, the iron master of the Phoenix Iron Company, had formed a company and started buying up old defunct charcoal-fueled iron furnaces to reopen, utilizing up-to-date equipment and anthracite fuel. One of these was here in Durham.

The new technology that the Whitakers were capitalizing on used plentiful anthracite coal from the Pennsylvania coal regions. The Lehigh and Delaware canal had been built in the 1830’s, providing easy transportation for coal fuel and finished iron products to and from the area at the mouth of Durham creek. Durham Iron Company (D.I.C.) had their own canal siding and a coal yard (see figures below). 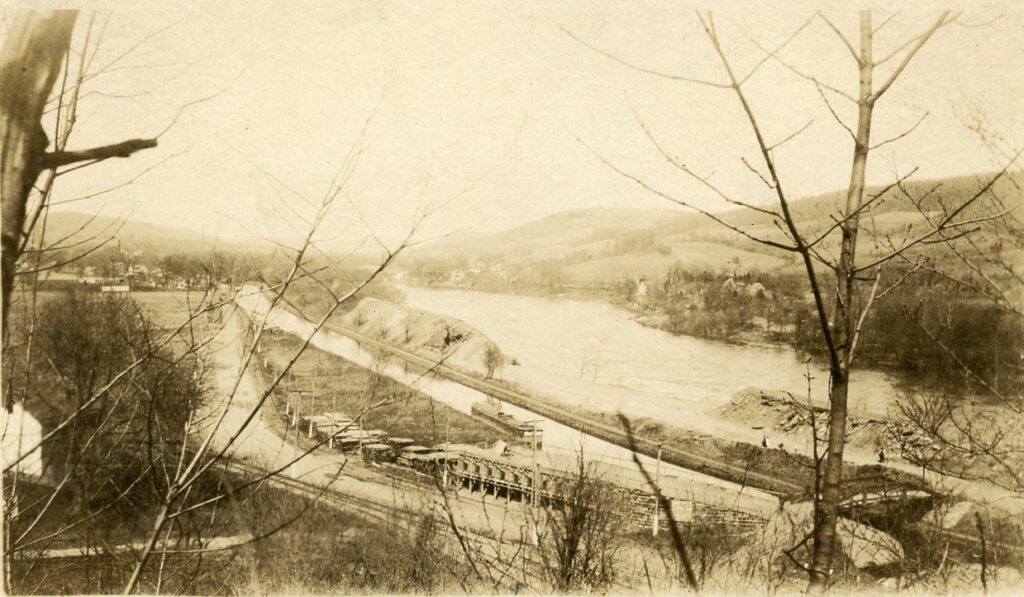 As the iron and limestone deposits that had facilitated the old charcoal furnace were hardly touched, at this time everything needed was in place for the new furnace location at the mouth of Durham/Cooks creek. An in-law and one of the business partners of Joseph Whitaker, James Pennypacker, was tasked with construction and startup of two blast furnaces on the site. During and shortly after the construction in August 1849 a cholera epidemic caused the death of over 40 workers and even claimed the life of James Pennypacker on  March 23, 1851–(see his bio in Notable Historical Persons of Durham). 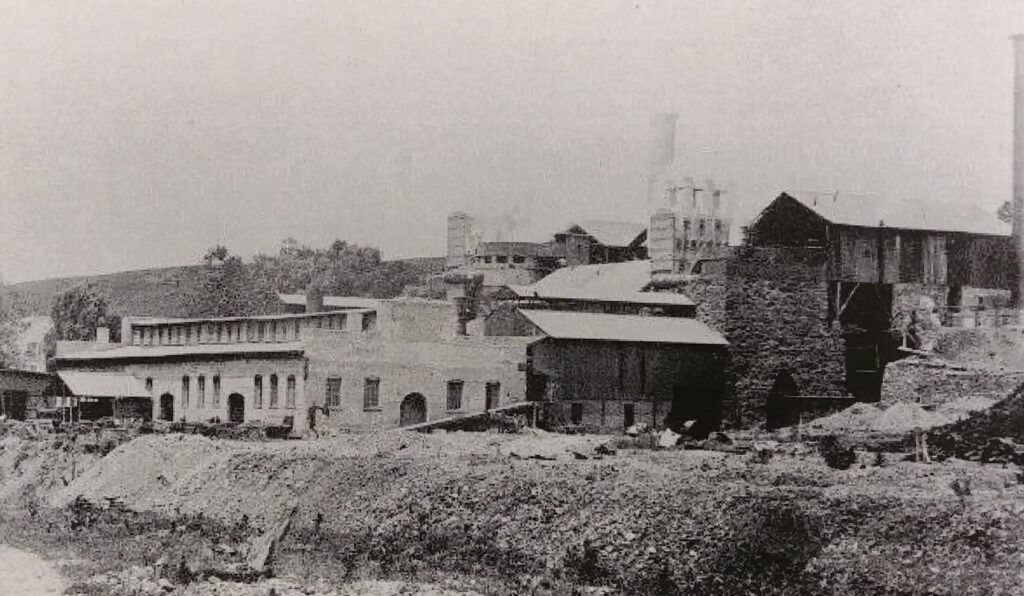 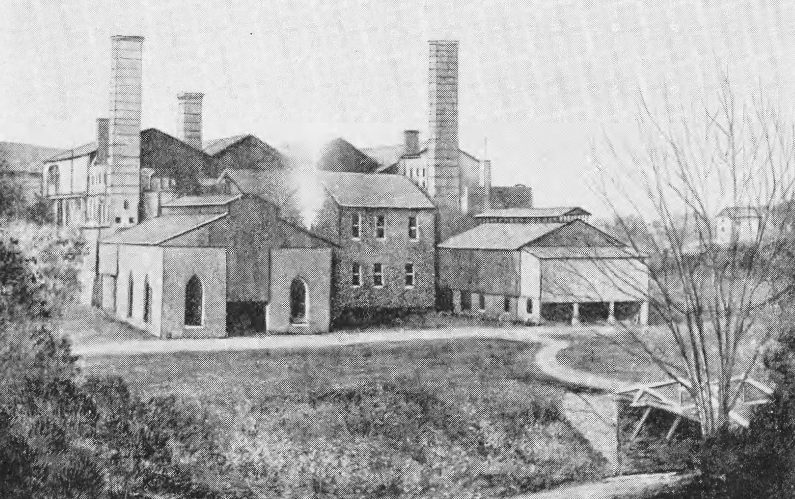 In the picture at left above, the moulding house was not constructed yet, making the appearance of a furnace complex of about 1850 have a different appearance than in a later photo (right) from about 1870 which shows the #1 blast furnace in profile and the new moulding house with arched doors now in place.

At first animal power (mules and horses) was the primary power source for ore carts coming from the mines and quarries. But technology was changing quickly. Steam power was soon utilized for air pumps, mine drills,  small locomotives, etc. The iron company even built two of their own steam locomotives to move the ore from the mines.

The iron produced was mostly in the form of ingots or “pigs” (right), shipped by canal and rail to be further processed into finished goods. In the 1850’s the Belvidere-Delaware railroad company laid down tracks on the New Jersey side of the river and provided an alternate shipping method.

In 1873 D.I.C. came under new management (Cooper and Hewett et. al.). The Whitaker company’s two stone furnaces were torn down and replaced by a single, large metal furnace of the latest design. The new Cooper and Hewitt furnace was put in blast February 21, 1876.

This map shows the layout of the furnace complex. Notice the canal spur up along the creek that was used as a loading dock for finished goods going out.

In 1876 the railroad company constructed a ferry to carry loaded railroad cars across the Delaware river to a siding on the New Jersey side of the river. This siding was still utilized (sans ferry) until recently (2020) by a cardboard factory in Holland Township NJ. 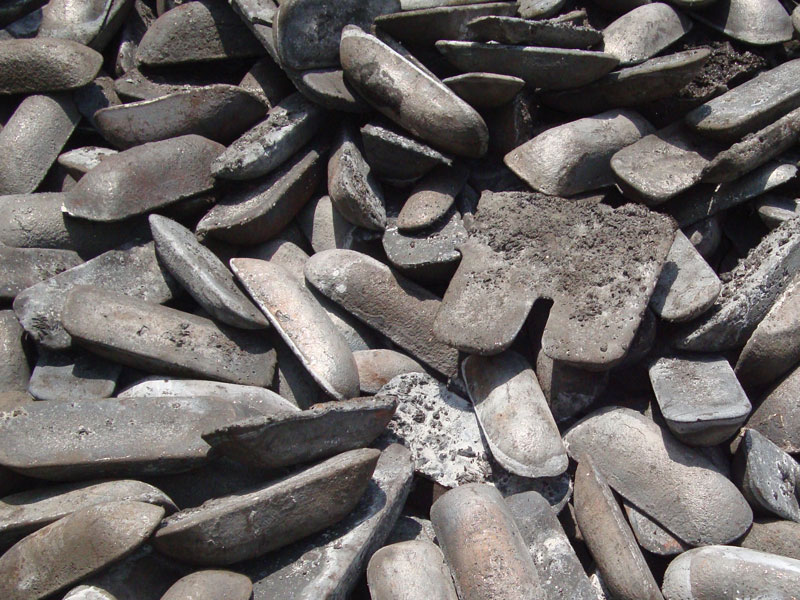 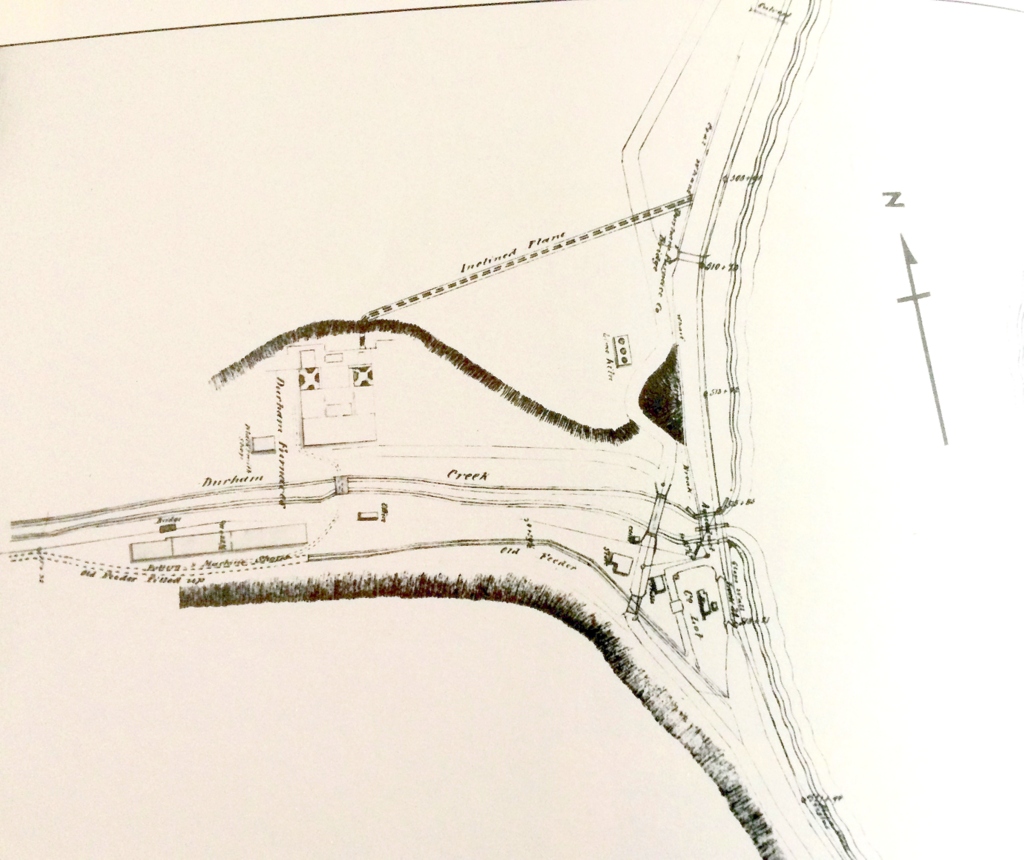 Cooper and Hewitt sold the company to the Lewis Lilly and Sons safe company in 1864 but in 1870 the Lilly company, after spending considerable money on improvements for the furnace and employee housing and school, was not able to make its mortgage obligations. Cooper and Hewitt re-purchased the D.I.C. and went back to making iron “pigs” for manufacture of finished goods elsewhere.

In 1901 a group of investors led by Mr. John Jamison started construction of a short haul railroad (Quakertown and Eastern Railroad) to service the Durham creek valley and the iron works. D.I.C. was to be a primary customer. This group also purchased the D.I.C. from Cooper and Hewitt who had been operating it at break even or loss for some years. Unfortunately, by the time of its completion the railroad was not able to live up to expectations, as the iron works was in serious decline due to competition from much larger companies in Bethlehem PA.

The iron furnace closed down in 1909. It was demolished and the property parceled out and sold over the next few years by the representative of the bond holders, a Mr. William Fling.

Once again Durham reverted to its agricultural roots.